One week to go until Levi's birthday! Aaaagh - It's so exciting and stressful all at once. But I can't even focus on that yet because he has been horribly ill (on the inside) all week. No sneezing or coughing or runny nose or anything obvious (hence the "on the inside" comment). But he hasn't eaten any food for six days and is barely taking any liquids either. He's been to the doctor who pronounced him laden with viral infection but wasn't overly concerned about it as his lungs and ears were good. Rest, pedialyte and time were the recommended treatments.


He's spent most of his days sleeping and is clearly exhausted when he is awake. He only wants to be held up on mom's shoulder and cries if you try to put him down anywhere. Thankfully today seemed like he might not be quite as sick as before. He drank more liquids than he has in days (though still not much) and was interested in playing with a few toys once he was medicated enough to be able to breathe.

All my fingers and toes are crossed that he seems improved tomorrow because otherwise, there's another visit to the doctor's office in his future! Well actually - there are more appointments in his future regardless because last week, he went to see a pediatric gastroenterologist to rule out complications from his GERD. He's been referred for blood tests, an upper GI xray series, a barium enema and a gastric emptying profile. And his Prilosec has been doubled to 2 doses per day.

On to happier thoughts...

This weekend is Levi's first Father's Day! He has participated in putting together a super-cute memento as a present for hubby. I'm certain he's going to love it and I look forward to sharing it here once he receives it!


﻿﻿
﻿﻿
Birthday party fun is slowly coming together. It looks like we'll have about 35 guests, which means that I've got to get crackin on my cake design and finalize plans for the menu. I have all the table supplies and balloons. I can't wait to put it all together and see the final result!

I definitely have mixed emotions about my baby growing up. I'm very excited to see what next year brings and in some ways will be happy to see this very tumultuous one end... BUT my baby is getting so big and I'm afraid the days of cuddles and snuggles are soon to be gone. I will hold on to them as long as I can, while still being the pushy mama bird trying to make her fledging grow! 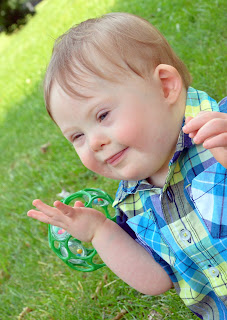 Saving more details for next week's monthly update, time for pics and stats...

UPDATE: Back to the doctor on Saturday and yup, he's got an ear infection in the left ear. Antibiotics are our friends and so hopefully by the end of Father's Day, he'll be feeling a WHOLE lot better!

Weight: 20 pounds, 10 ounces (down about a pound from previous measurements)
Length: 29 inches (I measured this about a bajillion times - I'm certain this is very accurate though I'm hugely surprised because he hasn't grown at all for several months - I especially wasn't expecting it while he's ill)