What a Month This Has Been!

My little pumpkin is a whole eight months old!! And what a month it's been... It seems like every other day, Levi was making some new achievement, reaching some new milestone. 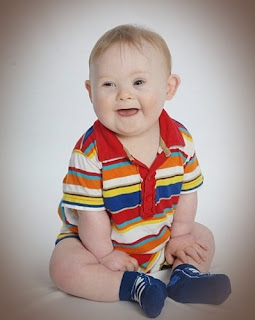 He can sit up independently now! He falls over some, but he can totally sit up by himself without any support for several minutes at a time as long as he doesn't get too enthusiastic about waving his arms all around while he's playing. At the suggestion of his PT, I've been stretching his hamstrings frequently so he's more comfortable with the long-sit and less likely to flex his legs into a ring-sit. That definitely helped his balance.

He's also been practicing his 90/90 sit on the stool. It helps to have a little support behind him, but his endurance and balance is better every day! Today he managed to stay on for about 3 minutes without any issues.

Watch out, World! He's beginning to army crawl! He started off on the inclined crawling track, but just 2 nights ago, he found motivation in a badmiton birdie which was rolling around on the floor and he pursued it to the best of his ability. He managed to move himself forward about 4-5 feet in the span of a minute or two. Not too shabby! Once he perfects his technique, I imagine there will be no stopping him as this kid LOVES to move!

His vocalization is still increasing and I'm starting to hear an occasional "gee" or "ya" sound in there. That's awesome. Perhaps the "ma", "da", "ba" sounds are not too far behind. One can hope! Also, when I'm feeding him lunch, I'm frequently signing "eat" and "more" and when I do, he seems to understand some part of what I mean as he'll yank his fingers out of his mouth (he's always sucking on his fingers in between bites) and open up for the next bite.

His bottom front teeth are still teasing us. I can see them - they're there... but they're still somehow under the gums. I don't know if the gums have swelled up around the top edges or what, but holy crow, they're slow....Despite a lack of teeth, he's been doing really well with eating. He has been eating the dissolvable baby puffs and does a fine job of gumming them to bits. He's moving his tongue laterally really well also and so I think that he'll soon be ready to move on to soft cubes of food. He loves to grab the puffs and try to get them into his mouth - though they often end up stuck to his face instead! Oh yeah - when I'm feeding him, if he's really into it, he'll grab the spoon and help guide it into his mouth. And then of course, he expects that I locate another spoon to continue the meal as he's loathe to give up his stolen one! Then I'm fighting both the fingers and the spoon as I try to get more food into his mouth. 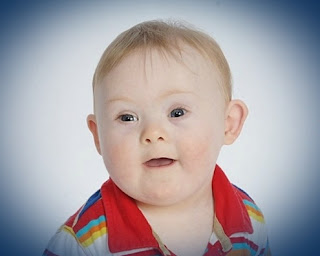 His sleeping has improved a little, at least in the of where he's sleeping... The swing gets used infrequently and I don't have to hold him until he's soundly asleep before I can lay him down. He falls asleep on his own without much fuss most of the time. I can see the difference in the back of his head already - his hear was all worn out from rubbing his head back and forth in the swing when what he really wanted to do was roll around. His hair (in the back) is finally playing catch-up with the stuff on top and on the sides.

﻿﻿﻿﻿﻿﻿
He just had a sleep study done and the unfortunate side effect of testing is that you sometimes get bad news. In this case, I found out that Levi is having some episodes of apnea while he's sleeping. We won't have the detailed report of the study for another week or two, so until then, I don't know what the source of the problem is. On one hand, it would be nice if it was an obstructive apnea issue because the treatment plan is fairly easy: remove whatever is blocking the airway (if it's bad enough). The downside is obviously the surgery. Trevor had his adenoids and tonsils removed before he was three, but his first surgery was after he was 18 months old. It's even more scary to me to think about sending an infant into surgery. On the other hand, if it's a central apnea, then the issue is more likely related to his GERD. The solution for that problem is less clear as it's more of a positioning kind of thing that usually requires trial and error. It might be an issue that has to be "waited out" if that's the case, which I don't like because now I'm worried about his safety while sleeping. The one thing I can say about it is that I'm glad I followed through with getting the study done sooner rather than later.
﻿ ﻿
He's been doing PT for 6 months now and so he was due for his Early Intervention review to update his IFSP. He has an OT (occupational therapist), whom we were meeting once per month for feeding advice, but we're going to start seeing her biweekly to work on developmental play as well as any feeding concerns and improving oral motor skills. PT will also continue weekly.

His growth has slowed down considerably since hitting 6 months of age, but he is still growing, so I believe there's no cause for concern. I spoke with his doctor about my concern that his thyroid might be functionally low, despite normal lab results. She insists that there's no evidence of cause for concern at this time and that we'll recheck around 10 months rather than a year since I previously checked at 4 months. He seems to be growing more in spurts than just a constant kind of rate. In fact, he's tall enough now that he can play in his jumper without anything under his feet except the carpet. That's a great advancement as Evan often came by and stole the little foam mats we stored under there. It was a pain to keep track of them.

He got his second flu vaccine with no apparent reaction - yay! And so now he's all done with shots until his nine month appointment, I believe - double yay!!

On the Down syndrome chart (which most physicians don't use any longer unless the child is too small for the typical charts), Levi is at about 85th percentile for length and about 90th percentile for weight. 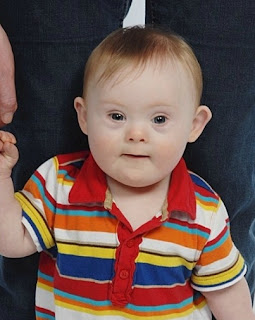 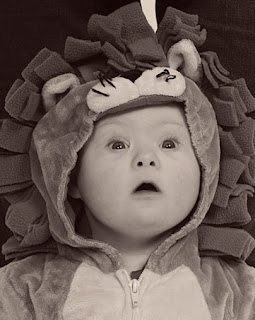 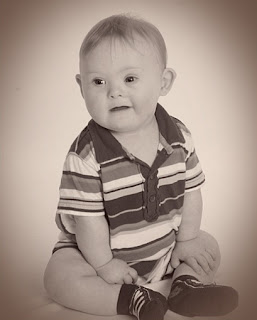 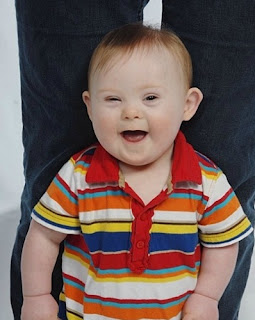