I've always been all about my birthday (weeks in advance) until this year. I wanted to get out to do something with my girlfriends, but beyond that, I had no expectations. I don't know why. Maybe at 33 my old age is catching up to me! Nah...

I am a firm believer that age is just a number and you're only as old as you feel. Somedays I feel 60 92. Somedays I feel energetic enough that I could pass for 20 again. Most days I don't care how old I feel and just wonder if I'll ever really feel like a grown up. I've had adult responsibilities for ages but often feel like I'm still trying to decide what I want to do when I'm all grown up! So odd... I wonder if my parents and grandparents still feel that way sometimes.


So in the end, it ended up being a great FANTASTIC birthday because my hubby surprised me when my alarm went off at 6:00 am that he took the day off work so that I could spend a little more time relaxing today. (today was a day just crammed full of appointments - I honestly had planned to spend ZERO time celebrating me). It was the best present I could ask for.

Well, enough about me. This is to be Levi's monthly update post. So here goes...

If you read my posts on a monthly basis, you know he's doing so well. This month was no exception.

Right after the last update, he starting pushing to a sitting position all my himself. Now he's a pro. And of course, he quickly learned how to get back down to the floor without having to enact a crash-landing. So he spends much of his time bobbing up and down. He's still "only" arming crawling - he refuses to get up into quadruped (though he can totally do it. I've seen him hold that position for a full minute when given no other choice). My best guess is that he's going to keep refusing to do it until his strength gets to a point where it's fairly easy for him to do it and only then will he get on hands-and-knees without major complaint.

Speaking of complaining. He is VERY vocal when he doesn't like what he's being asked to do. Or if he's bored and wants someone to pay attention to him. Or when he's done eating and doesn't want another spoonful of that stuff near his mouth! He often starts by just talking but quickly escalates to yelling loudly as it's much more effective as a room-silencing technique.

And what does he do when he's having a great time? He spits at you... okay, to be fair, he's blowing raspberries... the very messy, spitty kind. And he thinks he's hysterical for it. And yes, Evan agrees it's funny so he gets in on the act and next thing you know, everything around us is in the "splash zone" and I'm not sure if I'm completely grossed out or if I should think it's extremely funny too. I suppose it's a little bit of both! 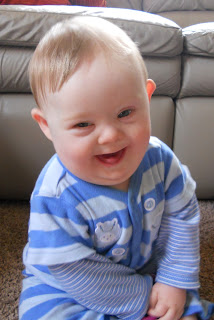 Levi has been testing out all different kinds of table foods this month. I don't think he's quite ready to abandon purees altogether as he can't consume enough to really fill him up just yet. But he'll eat a 4 oz jar of purees and then finish up the meal with some crunchies, some meat and some veggies. He seems to be very happy about this arrangement for now. He's also getting better about drinking juice from a cup. The cut-out cup is working well and although he still spills a fair bit, he's drinking most of it so there's definitely been progress in that area.

Levi has started going in search of entertainment. If he's in a different room from everyone else, he'll crawl to find us to see what's going on. He'll also crawl to pull the cat's hair/tail when he feels like it. (yes, she takes abuse from him as well as Evan - she deserves a medal, I believe) He seems to enjoy chasing balls across the room and has even decided he really likes his new play-table. He'll sit on a stool in front of it to play but will also spend time practicing his standing when coerced.

I can see that he's feeling a little weak in his legs again. When he stands, he pushes his tush out behind him so he can compensate and use his back muscles instead of putting all the work on his quadruceps. So we're trying to get in as much practice as possible with kneeling and standing (the proper way). He's gonna need the strength to move on to cruising and walking someday.

Levi had his followup with the cardiologist. The details are here. But I'll sum it up by saying that his heart looks great and we'll likely only be returning to their office one more time, right before he turns three.

I did try to get Levi sleeping in his crib since he's been rolling out of the swing onto his "landing pad" on the floor beneath him. Unfortunately, despite having the mattress elevated slightly, he was waking frequently - all congested too. I don't know if it's the result of his reflux or just congestion or perhaps the crib feels too "big" to him after being snuggled in the swing for so long. I know that reflux can cause congestion and so I was concerned that he needed to be elevated further. So I bought the Tucker sling for his crib mattress and he'll fall asleep just fine in it, but he still wakes 2-3 times per night while in it. Back to the swing he went. I'm frustrated because I want him out of the swing, but he sleeps so much better there... I keep hearing that the GERD is often outgrown between 12-18 months of age, so fingers crossed that we only have a few more months of this inconvenience!

He's still receiving PT services weekly as well as OT. His therapists feel he's doing great and so we keep on plugging away... I feel like the next major milestone (1 year of age) is looming large and although it's very exciting, it's a little nervewracking too. My goal for him is to be creeping on hands and knees and I don't know if he's going to be there. Thinking of stuff like that makes me feel a little sad and also wondering if I have done enough or perhaps my expectations are too high. But then I think of all the things he can do... He is chewing foods pretty well (considering he only has 2 teeth), he is willing to drink from an open cup, he can feed himself the table foods that he does eat, he is mobile and he can communicate excitement, boredom and a wide range of emotions. He also clearly enjoys playing and learning and certainly knows how much he's loved. I must remember the other things will come in time.... be patient, be patient, have patience!!

He has grown a little since last month, which was a relief to me. I had seen his growth taper off so much, but it hasn't stalled, so that is another positive. Also, he had his 12-month bloodwork done a little early (per my request) and everything came back great. No signs of leukemia and his thyroid numbers are right where they should be. We're still going to have a consult with the endocrinologist to talk about testosterone levels and to know what to look for as far as indicators of heading towards becoming hypothyroid. I'm also considering asking for a referral for a consult with a GI specialist if his reflux issues don't improve in the next month or so.

Next up is putting together details on his first birthday party. Ack!! Time keeps on marching... 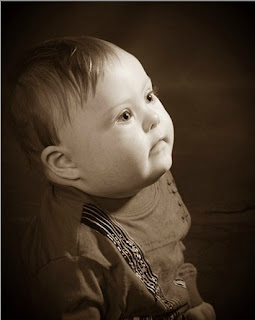 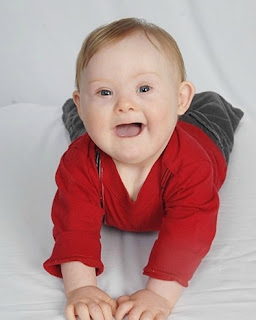 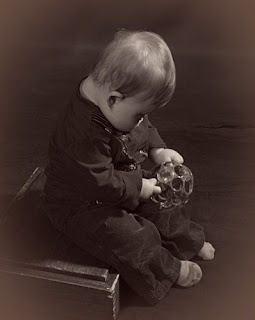 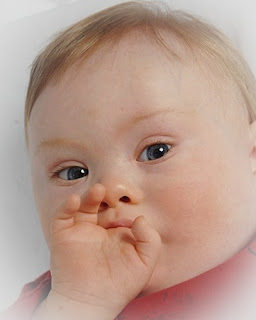 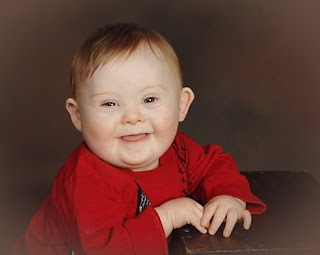 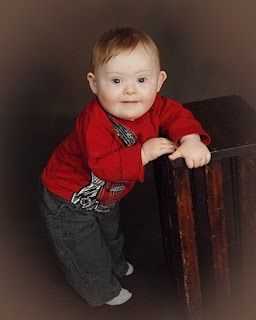