I usually look forward to the well-child checkups in our family. With Levi, there's usually some apprehension involved though. When you have a child who has developmental delays and is at higher risk for medical complications, you're often left feeling like you're waiting for the other shoe to drop.

Since Levi has been sick for the last week with a virus his siblings picked up when they went for their flu vaccines the week before, I wasn't sure how much today's visit was going to involve. I knew we were skipping the recommended vaccines. I don't do vaccines when the kids are already sick - it's too taxing to their immune system. So that part was out...

She checked his ears whilst I played "squish-the-baby", a game necessary to ensure proper lack of head and body motion. No comment on his ears, although I'm almost certain they're full of fluid. He hasn't been responding to my attempts to get his attention verbally the last few days. He's so congested, fluid in the ears has to be the reason why... At least they're not infected; I'm certain she would have mentioned that. Challenge #1: complete. Wait - I just looked at the clinical summary. Diagnosis: otitis media chronic serous. That's the big, fancy medical term for middle-ear fluid - all the time. I was right. Too bad.

She checked his teeth and throat and managed not to get bitten. Doc: 1 - Levi: 0. His upper molars are breaching the surface (ow!) and his lower lateral incisors are both through the surface, although the right one is a little further along. His upper lateral incisors are following right along. I imagine in just a few weeks, we'll see the points of those poking through too.

I explained that I just started the process of getting Levi seen at the Eastern PA Down Syndrome Clinic. It's about an hour and a half from our home, but my understanding is that they take a comprehensive look at the child's entire medical history and make recommendations on therapies and other specialists to be seen. I would really like to have extra confidence that we're not missing anything important. I'm already feeling kind of bad that I unknowingly let Levi's ears sit full of fluid for so long because we didn't get his hearing checked at six and twelve months.

He measured up at 31 inches (oops, try again, Nurse)... 30 inches (15th percentile) and weighed in at 21 pounds, 1 ounce (7th percentile). His head circumference is 17 3/4 inches, which comes out to the 4th percentile. She assured me that despite being very low, they are all right on track for where Levi has been for months. That is still a point I disagree with - I think that Levi needs to try a higher dose of thyroid medication yet. When he started his medication, he experienced an immediate growth spurt. He still has several symptoms of hypothyroidism after about 9 weeks of medication, so I hope to convince the endocrinologist to try the next higher dose and see how he does. 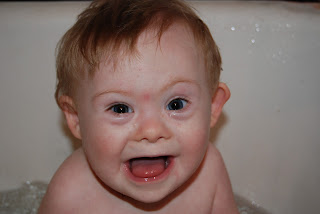 So anyway - that's all there really was to this visit. I gave report on how he's doing in therapy and some of the skills he's learning. She gave him the all clear and we're to come back at 18 months for the next checkup.
The vaccines on the table for today were for Hepatitis A, Chicken Pox and the MMR. I've already told her that I don't feel comfortable with giving the MMR until he's at least 2, maybe even 3. I'll have to look again at the need for the Hep A and the Chicken Pox vaccines. It's tabled for now.

I caught Levi practicing his proper standing techniques a little.... his standing used to always look like this:

Now, I'm starting to see more of this:

Late breaking news... got an update from the endocrinologist. Levi's TSH (thyroid stimulating hormone) is down to 3.23. The last test he had was 6-point-something. Prior to that, it was 11.6. So we're definitely headed in the right direction!! My goal is to get it down to between 1.00 and 2.00. From all the reading I've done, people with hypothyroidism seem to have the least issues with hypothyroid symptoms when their TSH levels are in this optimum range. So, I asked for a call back from the endo himself to talk about bumping his medication up to the next highest dose and see how he does with that. I hope he'll be agreeable to my master plan!