Levi is 37 weeks and 1 day old today. To me, it's significant, because he's been "out" as long as he was "in." I certainly never expected to deliver him that early and at that moment, I didn't feel ready... but it all worked out just fine and now we're closer than I want to be to his first birthday and time just keeps marching forward ever-faster...

This week, Levi finally gained enough strength and coordination in his upper body to be able to propel himself forward across the floor. I wouldn't quite call it army crawling - more like inchworming - but he can go! And he knows it! It's great to see him notice a toy from a few feet away and dedicate himself to (eventually) getting over to investigate. He does like to roll a lot and so I'll often see him combine the two moves to get where he's going!


I finally got in touch with the sleep study doctor. He confirmed that Levi had 36 periods of apnea during his sleep study two weeks ago. His oxygen saturation level dropped into the 80's during these periods and he was very restless, kicking around over 200 times. Overall, Levi only slept for about 80% of the night, so this is clearly affecting the quality of his sleep. Becuse no obstruction was detected, the conclusion is that this is a central-type of apnea, related specifically to Levi's reflux. He's already taking Prilosec (a proton-pump inhibitor) daily, so it seems we'll need to put him on another medication such as Zantac and also work with lifestyle changes such as not eating too close to bedtime and creating an inclined position for sleeping in the crib. Thankfully, this means we shouldn't be looking at surgery - but at the same time, it's not a clear-cut answer on how to solve the problem. Also, I don't know how I'll be sure that he's sleeping more restfully except that maybe he'll start sleeping through the night more often than he does now. Of course, the other kids began sleeping through when they dropped their overnight feeding, which was right around 9 months. Coincidence? Possibly - we'll see... 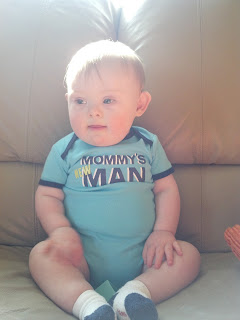 I asked his physical therapist to do a quick assessment of where he is developmentally when he had his therapy session this week. I expected to see some delays compared to typically-developing peers, but hoped that he wasn't more than a month or two behind at this point in time. I was pleasantly unsurprised to see that he came out at 6 months for communication (just like my other kids would have at his age - they were all more focused on gross motor stuff), 7 months for cognitive, social-emotional and physical development and 8 months for adaptive behavior. As I suspected, he's doing great! - Go Levi!

Today for dinner, we had something I was able to easily share with Levi without any alterations... a baked potato with sloppy joe, sour cream and shredded cheese. He ate about half of what I offered him and although he initially appeared a little confused about the texture of the beef, he seems to ultimately enjoy it and ate about a teaspoon's worth. I need to remember that it's time to make more of an effort to make sure he's getting more and more table food and less purees.


Levi did have another growth spurt this week. I thought  he might have after he slept all the way through two nights in a row! 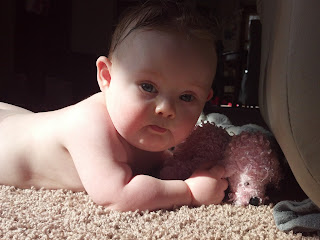 Oh, and his teeth - these teeth are the bane of my existance. Okay, not really... but this process is frustrating to me! They started coming in weeks ago and though the edge is finally through the gums, they're still not up far enough to see. Drat! My hope is that by next weekend, I'll have something white to look at (and photograph). Stay tuned... Levi's been pretty good about the whole ordeal. No drooling, no major tears, just lots and lots of chewing on anything he can get into his mouth.

Weight: 19 pounds, 10 ounces (I suspect now that he's moving so much his gains will probably be much slower here)
Length: 28 inches
Head Circumference: 17 1/4 inches

Email ThisBlogThis!Share to TwitterShare to FacebookShare to Pinterest
Labels: levi