Okay - not really... he's just the right amount of cute for being two years old!! Happy Birthday to The Destroyer! (also known as Evan) He's got a reputation for bringing mayhem with him wherever he goes, but he does it with a cheesy grin and a smile that lights up his whole face. This is probably the only reason that he's still allowed in the house. He's a classic example of a child being "too smart for their own good." But that's okay - we love him for ALL that he brings to the household. 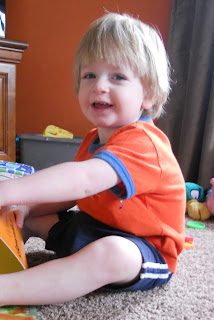 Evan is 36 1/4 inches tall (~86th%), weighs 27 pounds (~38th%) and wears 2T clothing. He's got sandy blonde hair and deep blue eyes and despite being the odd man out in resembling his siblings, he looks just like his daddy did at his age!

Evan is definitely left-handed. The kid prefers the left for just about every activity. He can use a tripod grasp when using a writing tool, but will occasionally grip it in his fist if it suits him. He's a super-active kiddo who wants to be outside all the time and loves to climb and run and operate all the tools/equipment he comes across (doors, locks, pencils, etc...) He only slows down for a little while if he's watching one of his beloved DVDs. He learned all his letters, numbers, colors and shapes by watching videos from a Preschool Prep collection. Once he soaked up all of that, he pursued the 3 Sight Words videos that came with the set. I couldn't have cared less if he got interested in learning to read yet - after all he was only one. But his older siblings wanted to watch and so he did too. And the next thing I know, he's reading the words he learned on the flashcards that came with the set. Then he would ask to watch the DVDs and he learned ALL the words in the set. I'm still impressed with that.

Once he exhausted that source of information, I started giving him DVDs from another early-reading set we had looked into. He's fascinated and I suppose I'll no longer be surprised if he's suddenly reading those "harder" words sometime in the near future. 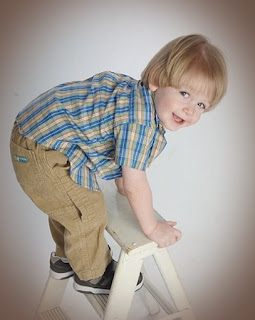 He has recently become a pacifier addict. In the last few weeks, he went from sleeping with a single pacifier to having one in his mouth and another in each hand for a total of three! I'm not sure when he realized this was a possibility ~ probably sometime when he was sick and I encouraged him to use a pacifier outside of naptime to keep him from putting every toy he encountered into his mouth. At least he's relearning that the paci's are for sleeping only and doesn't scream at me all day to give them to him. 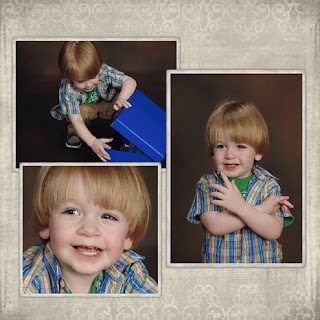 Speaking of screaming - his stubborn side has certainly been showing lately. He refuses to eat most of the food we offer. He will stand at the back door and petition to be taken out to play (loudly and often). Hopefully at some point in the not-too-distant future, this will turn into determination and persistence in a positive way. Until then, I'm covering my ears and waiting it out!

He loves books and is labeling things like crazy. His speech has come such a long, long way since beginning therapy six months ago. His therapist is really great (yes, I adore her) and I will miss our weekly "playdates" to help Evan further his skills ~ but the reality is that he's doing SO well, there's no way I see him qualifying for services when he's reassessed in another six months. In the meantime, his therapy is shifting from weekly appointments to bi-weekly visits to free up the therapists schedule to help other kids and because we'll likely be much busier with all our other playdates and activities through the spring and summer. If he doesn't need to be seen every week, so much the better! 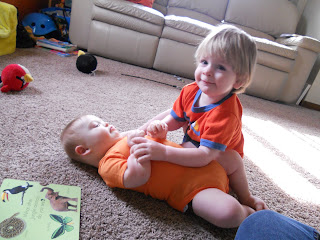 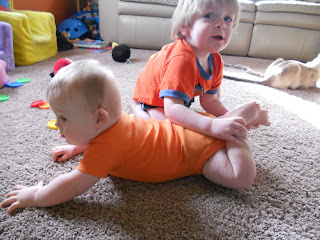 He is a clown to the core, but also, Evan loves to love on everyone lately. He shows affection to Mom, Dad, the cats and his siblings... This is my absolute favorite though. It makes my heart melt! 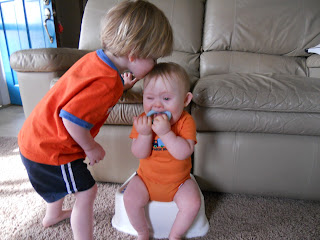 I am so excited to see what this next year has in store for Evan. I've said it before and I'll say it again - I've never met a Pisces I didn't like... Evan is proving my rule to be true. Despite our disagreements on diaper changes and eating and the like, we're buddies through and through. He is still my pookie-bear! 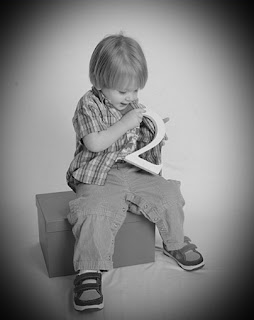 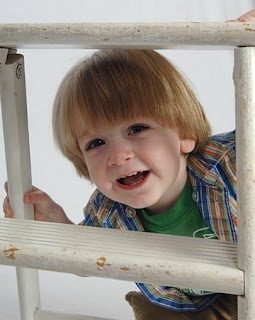