Another month down - and it was a great month, just as I had expected it would be! I swear it feels like I did last month's just a few days ago.

This month started off with the sleep study, which found that Levi was having episodes of apnea thanks to his GERD. The recommendation by the doctor was to add Zantac to his medication regimen. The problem is that his dosage of Zantac is 2 mL twice daily. The liquid is peppermint flavored, which all kids despise. And... this kid doesn't take anything without having it mixed into food. There's no way I can hide that much peppermint-flavored liquid. I inquired if there was any other prescription or formulary available but it appears there is not. So for the time being, I'm going to try to work with the Prilosec (which he's already on) to see if I can take care of the problem. To start with, I moved his dosing time from breakfast to dinner, so that it's most effective overnight while he's sleeping. I'm also trying to make sure he's not eating too big a meal all at once. That's hard to do, because the little guy is only awake about 10 hours per day - and has to eat 3 meals & nurse 3-4 times as well. He spends a LOT of time eating...

And yet, he hasn't really been gaining any weight. In the last 3 months, he's only gained about a pound and a half - none in the last month. I'm hoping it doesn't have anything to do with his thyroid - and is instead related to burning off more calories than he's consuming since he's been so active with his crawling and rolling and such. He has another thyroid check in a few weeeks, after his next checkup, so we don't have long to wait and find out.

I've also had a little luck with getting him to accept a beverage out of a cup/straw. He likes the Nuby sippy cup with a bite valve (because he likes to chew on everything). But... he seemed to be trying to figure out how to chew on it without getting liquid - it was really too big for him to get his lips around and hold to suck on it and bite at the same time to get a drink. So I switched to a Playtex Soft Spout sippy cup with a typical valve on it. He did okay once I took the valve out - he still doesn't seem to get that he's supposed to suck on it. Without the valve, he'll let a few drops into his mouth with his mouth around the spout and then swallow it. That's progress! Then a few days later, I tried the honey bear cup with a straw and he actually did swallow a few sips of that as well. (we've been doing watered-down juice only). His OT had pointed out some time ago that drinking from a cup is so different from nursing. With nursing, he has a very wide latch and the liquid comes directly to the back of the mouth. With a cup/straw, the liquid arrives in the front of the mouth and he has to control it and move it to the back of the mouth to be swallowed. So really, this is an entirely new process for him. I just have to keep giving him opportunities to practice and he'll get the hang of it soon, I'm sure. He'd probably be an expert already if I was persistent about it. But I only seem to remember once every couple of days!


His two lower central incisors (front teeth) finally came through starting on March 5th (36 weeks). It took about 2 1/2 weeks, but now you can plainly feel both teeth and see them pretty well too. Of course, it will probably be another month or so until they're up the whole way so that you can see them every time he smiles.

Around 36 weeks, I did request to have his PT reassess his progress on the Early Intervention test that they use to determine how much of a developmental delay a child might have in any of the five areas they evaluate. His scores came out pretty much right where I expected - he was at 6 months in communication (he's certainly the strong, silent type), 7 months in cognitive, social-emotional and physical development and 8 months in adaptive behavior. To me, that says he's doing really well! Rumor has it that kids with Trisomy 21 sometimes plateau developmentally at around 8-10 months of age and that the gap between them and their typically-developing counterparts tends to widen at that time. This may be true for Levi; it may not. We won't know until we get there... and though I tend to focus a lot on numbers and short-term goals, I'm also going to try to remember that almost all kids with Trisomy 21 learn to do all the things their peers do... they just need a little extra support and time. I will need to remember to be extra patient (not one of my natural talents) and know that he too will get there... regardless of the time it takes. 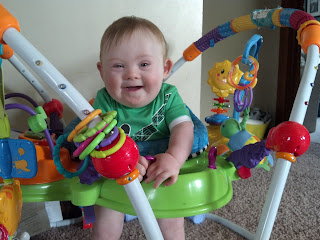 I've mentioned this in my weekly posts, but I have to say it again... Levi is mobile! He can inchworm-crawl the whole way across a room if he's so inclined. Unfortunately, he realizes that it's a lot faster to roll most of the way there and then crawl the last foot or so. So we spend a lot of time trying to convince him that crawling is more fun...he's not buying it. Well maybe he is (a little)... on his own terms. 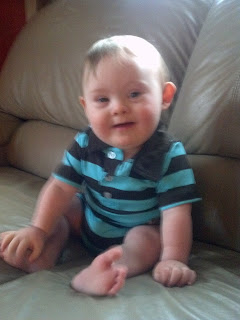 We've (his therapist and I) realized his weakness seems to be not so much in his arms as in his shoulders. So to strengthen this area in the hopes of making quadraped crawling a possibility sometime soon, we've been trying to encourage him to kneel with some weight on his straight arms. The problem is that if I do get him in that position, he almost always tries to straighten himself out - extending his back and doing the "superman." I knew we had nicknamed him Baby Superman for a good reason! He also needs to increase his abdominal strength to help hold himself up in a quadraped position. So it's lots of crunches and pushups for this kid's homework assignments! 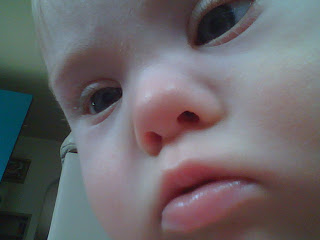 He's thrown one other wrench in the works - he's figured out how to transition from stomach to sitting. He can't quite do it completely on his own as he needs a little help to lift his hip up... but he's doing 95% of it without assistance. That means that whenever I try to have him practice doing pushups, he flips his little foot out and voila! he's sitting. I think he's just doing whatever it takes to avoid being on hands and knees...

Still not much talking. He has taken to spending time yelling at the floor and occasionally a cat and less often, me. When he gets frustrated or is working really hard, he'll make raspberry noises. When he's bored or just wants to hear himself, he yells! Hubby swears he said, "Yep," once while he was playing with him. Who knows... as long as the doctor tells me his ears look clear and he contines to respond when we talk to him, I'm going to presume his hearing is still okay and that he's just too busy working on motor skills to bother with language yet. But I'll be keeping a close eye on it, nonetheless....

Wow! So much to say - but I think I've finally covered everything... see you soon!

Oops! An extra thought - he has realized that my phone can be something fun. If he's sitting on my lap when I'm doing something with it, he's grabbing and scrambling to have a chance to play with it. Typical of my kids. Love it! 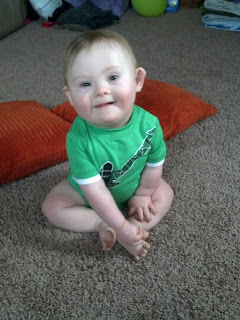