Last year at this time, I was 33 weeks pregnant with my last child and my biggest concern was whether my third son would look more like Trevor or Evan.  I walked a fine line between being totally ready to meet "Baby Superman" and wanting him to stay inside as long as possible! Little did I know that 4 short weeks later, my baby would rock my world in a completely unexpected way...

Here we are only one month away from his first birthday and my world is so completely different from what I imagined when he was just a few days old. I was so scared for our future and now I am so hopeful. I am realizing that the overall picture might be a little different that what I had initially envisioned, but I think it will be just as beautiful!

Levi started waving occasionally almost a month ago. He puts his little arm up in the air, more in a salute... but it was definitely in response to us saying, "Hi" to him...He learned to push the button on the busy box which makes one of the animals pop up. He also became very good at pushing them all back down and enjoys when he gets the opportunity because Evan apparently still feels it's his toy to operate and usually runs to take over when he sees what Levi is up to.

He started doing this unusual move where he puts the soles of his feet together and then leans forward on to a knee and has his arms straight. This seems to be as close to the quadruped as he's comfortable with doing on his own. He'll even rock from one knee to the other before sitting back down, which helps him to easily change the angle of the direction he's facing. Of course I'm still trying to get him to practice quadruped, which he still gets very upset about. He gets pretty vocal in his complaints when I'm trying to hold his hips in position.

In an effort to avoid this, he's picked up yet another skill. He's beginning to pull to a stand. The caveat is that he locks his knees and sticks his bum out at an angle so he's not really using his quadruped muscles to support himself. We bought him his first pair of shoes (high tops with ankle support) to give him a better sense of stability - and sometimes I put a book under the toes of his shoes, which helps to keep him from locking his knees and forces him to use those upper legs muscles. He is slowly building up a tolerance - he used to tire almost immediately, but now he's able to hold that position for as much as 20-30 seconds before he fatigues and needs to sit down. He's so cute though, in the way that he'll turn and look at me over his shoulder in an attempt to "flirt" his way out of having to work so hard. You can literally see him thinking, "Look at me! I'm too cute to make me work this hard! Let me do it my way..."

He started wearing 18 months clothes. He still fits into some of his 12 month items, but the onesies, in particular are getting to look more like sausage casings! So up to the next size we go... I suspect he'll be in this size at least until we get close to the end of the year. 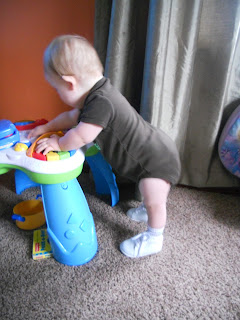 At the beginning of May, he started biting while he was nursing (I suspect that's when his upper front teeth really began to bother him - they are now getting really close to cutting through the gums) Anyhow - within a couple of days, he quit nursing, cold turkey and though it took a couple of days, he did start taking a bottle. Initially, he was only drinking about 8 ounces per day, but we've finally worked up to about 15-16 ounces. I'd like to get him closer to 20 ounces or so but he just doesn't seem to have the room to drink all of that plus eat food. We're working with a nutritionist through EI to eat nutritionally-dense foods which will also help him transition to more table foods from the purees. It certainly has been a very stressful issue for this past month. I worry if he skips a bottle or doesn't want to eat a meal because I worry that he's not getting enough calories to grow or maybe he'll become dehydrated.

We were fortunate enough to be able to get into see the endocrinologist, who reassured me that all currently seems to be well with Levi's hormones. There is no apparent trend of a problem with his thyroid. His last thyroid test was in normal range and was actually better values than the test done at about 4 months of age. Right now, he's not scheduled to have another thyroid panel until he's 2, but I may want to check it again around 18 months, especially if he continues to grow so very little. I was quite disappointed to find that Levi is a full 1/2 inch shorter than what I had thought via my at-home measurements. I suppose it's one thing if all of his "systems" are working as well as they can, but he still ends up being short - it's completely another thing if I miss something (i.e. symptom of a problem) that causes him to lose potential growth. No plans right now to follow up, but we're welcome to return if we have any concerns.

I've heard some new babbling in the last month, though it disappeared again when he started developing some new motor skills. I love hearing him say, "Blah, Blah, Blah!!"

We quit using the Tucker Sling during the last month and switched to sleeping flat in the crib. He still wakes up around 5:00 in the morning and ends up going to the swing so he stops chatting to himself and goes back to sleep until around 6:30. He does pretty well overall and usually sleeps through the night. 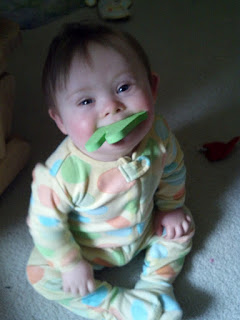 He got some practice eating birthday cake when my mom (Nana) came over for Mother's Day. Her birthday is the week before, so we all had some chocolate cake to celebrate and Levi was not completely sold. He seemed to like it, except for the fact that he couldn't get it off his hands in order to suck on his fingers that he always has in his mouth.

Levi's birthday party is coming together. I want everything to be perfect because he deserves it but it seems like there are so many other distractions trying to keep me from making a lot of progress. I guess I'll just have to do some Mommy magic and make things happen!

Next monthly update will be after Levi is one! Stay tuned... 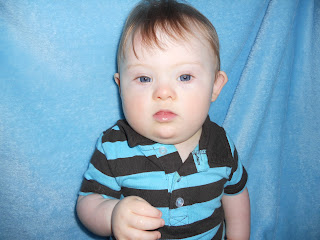