Okay, so maybe in my own mind, the countdown has been going on for a while. 5 weeks! That's all that stands between Levi and his first birthday. I'm officially in the midst of party planning and I will admit that thus far, it's felt the most exhausting. I think it's because I'm trying to go big - this is our last first birthday, after all - AND stay within a reasonable budget. All of this while trying to still keep it all fun and exciting. It's hard. Sometimes too hard for a woman who wants nothing more than to fold some laundry and take a nap (most days). But it will be sooo worth it once party day is here! 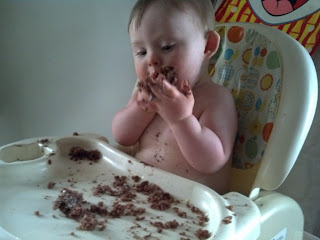 I think that Levi's birthday will be bittersweet - I read so many stories of parents who have kids with Down syndrome. Many have confessed that birthdays, especially the first one, can be difficult. It truly is a celebration of life and all that the little one has worked so hard to accomplish, but it can often be a painful reminder of how the gap between their child and "typical" peers is widening. Will knowing that this issue will likely be dredged up from the bottom of my heart help to keep me from feeling that sadness? Only time will tell... For now, I'm going to focus on the details of the party and keep enjoying what's left of the rest of Levi's first year. It will be over before I know it! 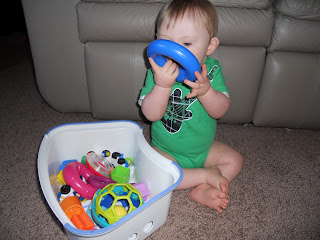 So at 47 weeks of age, I discovered a major error on my part. This knowledge came about accidentally as I found a better way to measure Levi's length. He's so wiggly, it's hard to know whether I'm getting an accurate measurement. So along with this "new and improved" method, I found that Levi's actually a full half-inch shorter than what I'd thought! Ack!! For whatever reason, his growth (length-wise) has always been one of the things I like to keep a close eye on.

This new information drops his height down to about the 15th percentile on the typical growth charts. I'm so happy we have an appointment with the endocrinologist next week. I'd really like confirmation from an expert that I'm not doing anything (or NOT not doing anything) which might be affecting his growth negatively.

This week, Levi has shown serious improvement in taking a bottle. He's averaging almost 15 ounces per day, which is great. The recommendation for a child his age is typically a minimum of about 16 ounces per day, so he's really close. The problem is that pumping breastmilk is not going so well. I can't keep up with that demand so I've needed to mix in formula. I don't mind that so much as long as he's getting at least 6 ounces or so of breastmilk per day along with the formula. I'm just doubting whether we'll be able to make it to his birthday. Ideally, I'd love to keep a few ounces of breastmilk in his diet for another couple of months, but I donated almost my entire "stash" from the freezer a few months ago because it seemed he was never going to take a bottle and I didn't want it all just to go to waste. Live and learn, I suppose...


﻿﻿
﻿﻿
Levi has started to develop another skill, which I believe is part of his overall plan to avoid four-point crawling! He's started pushing to his feet from a sitting position. With practice, he'll learn to pull to a stand from one knee/one foot. It's a rudimentary skill right now, but I look forward to seeing how he's doing near his birthday!


Yelling is still Levi's favorite form of communication, though I am hearing more and more of the complex babbling sounds. I definitely need new ideas on how to motivate him to talk more. When he wants attention, or is bored or is just trying to be silly, he gives a loud, throaty "aaaaaaah!!" I'd actually do the sound for you, but it kills my throat - I don't know how he does it all day!

Here's a sneak peek at the inspiration point for Levi's birthday. I'm so excited!! 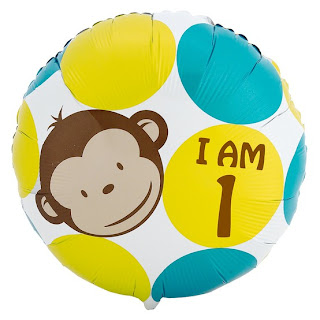