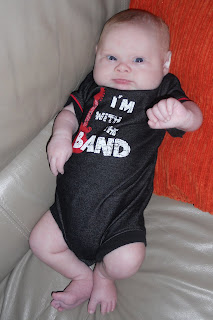 My baby boy is eight weeks old today! The last 56 days have flown by in the blink of an eye and I can't imagine how short a time it will be until Levi has been with us for 100 days and then 6 months and then a year! I used to wish time away; now I pray for it to slow down (except in that last hour before the kids go to bed for the night - by then I'm desperate for me time)

I was thinking about how much I've been changed in these last eight weeks and in honor of this, I'm listing eight things I didn't know eight weeks ago.

1. I didn't know if my heart could handle what I feared when Levi was born: that he had Down syndrome. I felt sure it was going to crumble into pieces. I would cry everytime I began to wonder if it was true. I went back and forth between being sure everything was going to be okay and feeling crushed and wondering, "Why me? Why us?"

2. I didn't know that Evan would be so jealous of his little brother. When our second child was born, our oldest was 19 months old and she handled it well. I presumed Evan (aka #3) would do the same when Levi arrived. What I didn't take into account was that Evan was only 15 months old and that he was used to having me mostly to himself; whereas, Katelyn had been in full-time daycare before Trevor was born. As a result, Evan has regressed in his speech and has become very crabby at his most vulnerable times of day (right before nap and bedtime) I can only hope that once the big kids are back in school, he'll be better off since I'll be able to spend more one-on-one time with him during the day.

3. I didn't know how much I forgot about having two kids under the age of two! I remembered that going from one to two kids was difficult, but that going from two to three wasn't bad at all. I guess that was because the age gap between Trevor and Evan was 3 1/2 years. Now I'm back to needing a stroller for every outing and I have to add 10 minutes to each trip just for getting in and out of the van ~ and that's on a good day!

4. I didn't know how much pleasure it would bring me to see my two oldest children enjoy their baby brother. A year-and-a-half ago, Katelyn enjoyed the novelty of a new baby for a few weeks and then moved on until he became more interactive. Trevor was only 3 1/2 when Evan was born and was interested for about 10 minutes! This time around, both Katelyn and Trevor were overjoyed to be able to meet Levi within a few minutes of his birth. From the beginning, Trevor has been proud to introduce Levi to friends and family and strangers alike. He constantly tells me how cute Levi is and how much he loves him. Katelyn is still very interested in mothering Levi. She holds him and plays with him and protects him from any perceived threat. They're the best!

5. I didn't know that less than two months after Levi's birth, I'd be missing being pregnant. I should've known - I've felt this way before. But thanks to a vasectomy, I know for sure that we are done. It's a good feeling in a way because we can move on from the "child bearing" years to the "child rearing" years and we can look forward to all the things that are easier to do when you don't have tiny little babies and toddlers. Beach vacations, amusement park visits and even local trips are all easier once the kids are walkers and talkers and have regular schedules for napping and such. In another two to three years, these kinds of outings should be a breeze!

6. I didn't know that I'd be blogging. As a project, it seemed overwhelming and I didn't know where to begin. I've found that just like any other task, you just start somewhere and the rest will come to you!

7. I didn't know that I'd become so knowledgable about Down syndrome. I thought Asperger's syndrome would be the only disability on which I'd be working on becoming an expert! The genetic counselor we saw when Levi was only 3 or 4 weeks old even made a suggestion that I find a forum to teach others about Down syndrome since I had learned so much even before our first meeting!

8. I didn't know that everything would be okay. I guess in a way I still don't know this for sure. But I'm feeling that it will be and so I guess that's a whole lot closer than I was eight short weeks ago. I'm coping by focusing on the positive aspects of our lives and by doing.
Posted by Unknown at 6:05 PM