Just when I thought I could no longer manage all four kids at home, the light at the end of the tunnel began to shine brightly. The sun no longer stays out until eight o'clock at night and it's too cool for swimming much after dinner. It's time for the new school year to begin!

All the pre-school-year rituals have been completed. We went shoe shopping and spent too much. Katelyn was satisfied once she had a new pair of dress shoes in patent leather and complete with mini wedge heels. Trevor was happy just to leave the shoe store... Then there was the trip to buy all the school gear. $70 later, we go home happy with backpacks, lunchboxes, thermoses, freezer packs, notebooks, folders and crayons. All shiny and new and waiting to have each student's name printed neatly in the corner. I was reminded of the excitement of having brand-new stuff each school year and feeling super organized and so proud.

Finally the big day arrives - the first day of school..for Katelyn anyway. Kindergarten has a staggered start, so Trevor has to wait an extra day, but everyone else starts on Monday, the 29th. We did so well that morning with getting ready and out the door. We only left one minute late! But I forgot that with half the kindergarten class not in attendance, the bus arrives early and so we nearly missed the bus despite the good start... As a result, I didn't get to take pictures until the end of the day. She informed me that she had a great time and that she's happy that one of her best friends is in her class again this year! 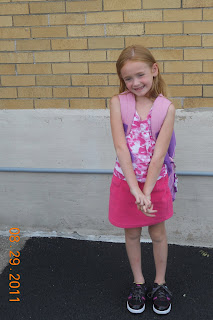 Trevor's first day of school was Tuesday, the 30th. That morning, we were more successful in getting out the door on time. All six of us (hubby stayed home to accompany us on this momentus occasion) marched to the bus stop early enough to wait around for a few minutes before it's arrival. We even had time for pictures before school! 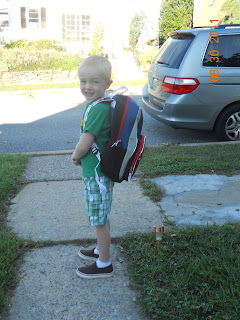 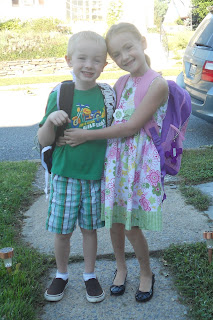 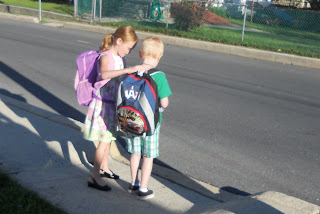 At the end of the day, Trevor actually ran off the bus to me and proclaimed that he had a wonderful day! I believe "awesome" was the word he used to describe it. I was thrilled as I had worried that it might be a difficult transition for him, given his difficulties with socializing.

He was so excited to share his news of the day with me; I was really impressed as that goes beyond his typical desires for reciprocal conversation. Usually, he tends to have a very one-sided conversation about whatever crosses his mind. It was a nice change.

Later that evening, he did confess that he was somewhat sad as he tried to make friends, but the other kids wouldn't talk to him during the day. We suggested that perhaps they're having a hard time getting settled into a new schedule and that with time, they will become more friendly. I can only hope that this is the case; I certainly hope that kids aren't picking up on his differences this early. He got along with all the kids in preschool; I can't imagine why kindergarten should be that different... only time will tell.

The next day, Trevor tells me that he didn't have a good day because he was reprimanded for picking up a toy when they were getting in line for recess. But, he did point out that the next day, he would do better and not get a "frowny face" on the board next to his name. One more day until week number one is complete!

As for my days, with the big kids gone, it's certainly much more quiet in the house. It is nice to have time to once again focus on developmental play with Evan and one-on-one time with Levi while Evan's napping. I have hopes to eventually fit in exercise (for me!) and cleaning (more than tidying) the house. I did miss them for a few moments throughout the day, but mostly, it was just peaceful. I look forward to many more enjoyable days this year with these guys!