What do many think of when they hear the words, "Down syndrome?" For quite a few, thoughts turn to the sterotypical characteristics listed on many websites:

The list could go on, but I'll stop there. I think you get the idea.

Now, what do people think of when someone says, "Trisomy 21?" Most likely, thoughts turn to something rather unbiased. Something like, "Oh, that sounds like a medical condition." They may, in turn, have questions about symptoms, related conditions or treatment, but in many cases, the stereotypes associated with the term, Down syndrome, are going to be absent from their opinions regarding said medical condition.

I personally would prefer to eliminate the use of the term, Down syndrome. The word "Down" has a negative connotation all on it's own. It comes from the name of the individual who identified the syndrome back in 1866, but none-the-less, it would have sounded a whole lot better if the guy's name was John Langdon Up. In the context of our culture, the lay-person's terminology for this genetic condition is depressing and detrimental to those labeled with it.

When necessary to disclose my son's condition, I have decided that going forward, I will tell others that he has Trisomy 21, aka T21. The problem is that many people outside of the medical community won't have a clue as to what I'm referring. Then, a thorough explanation will need to follow. The extra work will be worth it as this will give me an opportunity to dispel some of the negative stereotypes associated with the condition and make sure people get to know Levi for who he is.

Others may disagree with my perspective on this matter, but I can guarantee that there is a whole community of parents (and others) who care for someone with T21 who would prefer that their loved one be judged for who they are and not the labels associated with an entire group of people who are as diverse as any other group of people with the same medical condition.

And on a final note, I have a hard time making a post without throwing in a picture, so lucky you...here's a cute one! 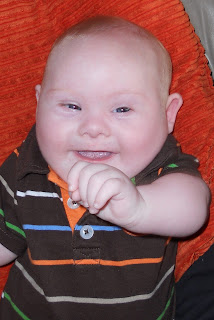 Email ThisBlogThis!Share to TwitterShare to FacebookShare to Pinterest
Labels: 31 for 21, down syndrome awareness